backNational Center of Photography and Images (2014 to present) 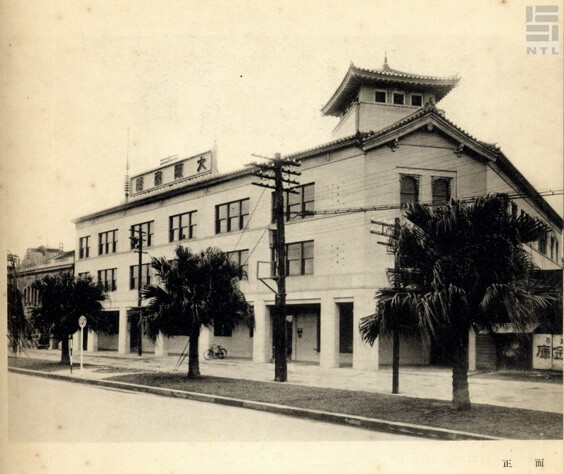 Upon its designation as a monument in May 2014, the Bureau of Cultural Heritage, MOC commissioned Hsu-Yu Chien Architecture Firm to undertake the restoration and reutilization work on the former Osaka Shosen Kaisha (Osaka Mercantile Co., Ltd.) Taipei Branch, with guidelines to return the building to its original appearance upon its initial completion in 1937. Spaces that underwent major alterations or which no longer exist from the 1968 renovation would be “designed for reuse” in accordance to the requirements of the National Center of Photography and Images.

With reference to verifiable historical photographs, historical architectural design documents preserved in the Journal of Taiwan Architecture and remanent architectural elements, the adjacent nine-story structure and the fourth storey of the main building were demolished. The rooftop spired-turret was then reconstructed, and the spatial sense of the arcade was also restored. The interior spaces were designed for flexibility and adaptability to meet the needs of displaying and exhibiting photographic works. The restoration work was attentive to the flooring and windows, hardware reproduction, restoration of wall faces, and plasterwork, etc. The restoration works officially began on January 17, 2017 and was completed at the end of July 2019.

Restoration work on the turret.

The building was designated by the Department of Cultural Affairs, Taipei City Government as a Municipal Monument in May 2014, and was identified that same year by the Ministry of Culture for restoration and reuse as the National Center of Photography and Images (NCPI). The Bureau of Cultural Heritage, MOC was in charge of the restoration of the monument and the National Taiwan Museum and the National Taiwan Museum of Fine Arts (NTMOFA) overseeing the interior design and outfitting. The NCPI is currently under the management of the NTMOFA, and will serve as an important focal point for the aesthetic presentation, historical research, asset preservation, and international development of Taiwan’s photography and image arts.

The building is located within the bounds of the West Gateway Plan, in proximity of the National Taiwan Museum, the Former Mitsui & Co. Taipei warehouse, Beimen Post Office, the North Gate tower, the Railway Department, etc., providing a spotlight arena between Zhongxiao W. Road and the museum system in Old Taipei city. Neighboring Bo’Ai Road and Hankou Street are home to many shops selling photographic equipment, and is known as “Taipei’s Camera Street”. It is noteworthy that this area has been the mainstay of the portrait studio industry since the Japanese colonial times. Hence, the National Center of Photography and Images hopes to integrate with the surrounding geographical resources, to connect with the cultural asset system as well as the culture of the portrait studio district, to recapture the charm and historical memories of Old Taipei.